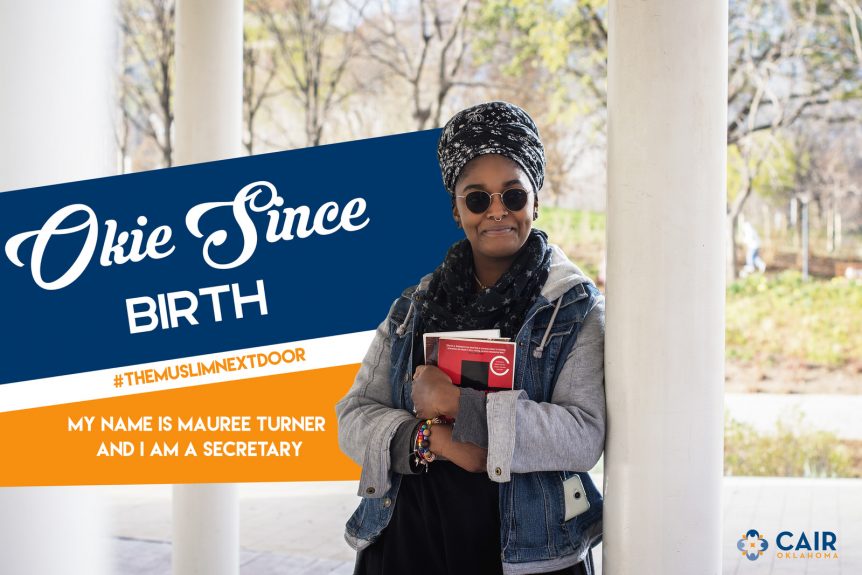 Mauree is the secretary and treasurer for the Oklahoma State University Leadership and Campus Life Department. In addition, she is working on her second internship for CAIR this summer. In her free time, she enjoys playing the guitar, reading, hanging out with friends, and skateboarding. After she graduates in May, she will look for community organizing or event planning jobs, but she’s not ruling out graduate school. She describes community service as “near and dear to my heart” and wants to support her community in any way she can. As such, she may go to graduate school for public policy.

“I’m thankful for the opportunities my religion has given me to give back to the community.”

Born and raised in Ardmore, Oklahoma, Mauree acknowledges there are areas in which Oklahoma needs improvement, but she sees that

as a positive. “There are opportunities to make change wherever you go. Some may think that’s a bad thing, but my mom instilled in me to ‘be the change'”. Oklahoma provides multiple avenues for Mauree to follow her passion for activism, and she spends a lot of time volunteering. “I’m thankful for the opportunities my religion has given me to give back to the community.”  Oklahoma is home for Mauree and her family. “My mom and grandma still live [in Ardmore]. My dad lives in Wynnewood, Oklahoma. We’re all here”

Celebrating Juneteenth is also important to Mauree. Juneteenth is the oldest tribute to the end of slavery in the United States. Since its beginning in 1865, families have commemorated June 19th as the African American Emancipation Day. Mauree and her family typically celebrate Juneteenth in Ardmore. “The whole black community get together and go over the history. It’s like a big family reunion.” This year, Mauree and her brother attended the 1st Annual Jewel Theatre Juneteenth Film Festival in Oklahoma City, which showcased local black vendors, directors, political speakers, artists, and food.

“Often times you see a negative image of Muslims in the nation, because that’s what the media portrays.”

Her favorite thing about the United States is “the ideology that people can come here and start a family, that it’s open and welcome to everybody.” She acknowledges that not everyone feels welcome, particularly Muslims. She admits that she has been told she doesn’t belong in this country. “I’ve only heard that once, but once is once too many times… I think it’s one of the most unAmerican things to say, because that’s what America is founded on, letting people come and raise their families here.” Mauree cites the media’s portrayal of Muslims as a factor contributing to the prejudice against them. “Often times you see a negative image of Muslims in the nation, because that’s what the media portrays.” She states the number one misconception about Muslims is that they “promote violence, hate, and terrorism.” Volunteering gives Mauree an opportunity to meet people and answer their questions about her faith. Their experience with her can challenge any stereotypes or misconceptions they may have. “Small conversations can make a big change,” she asserts.