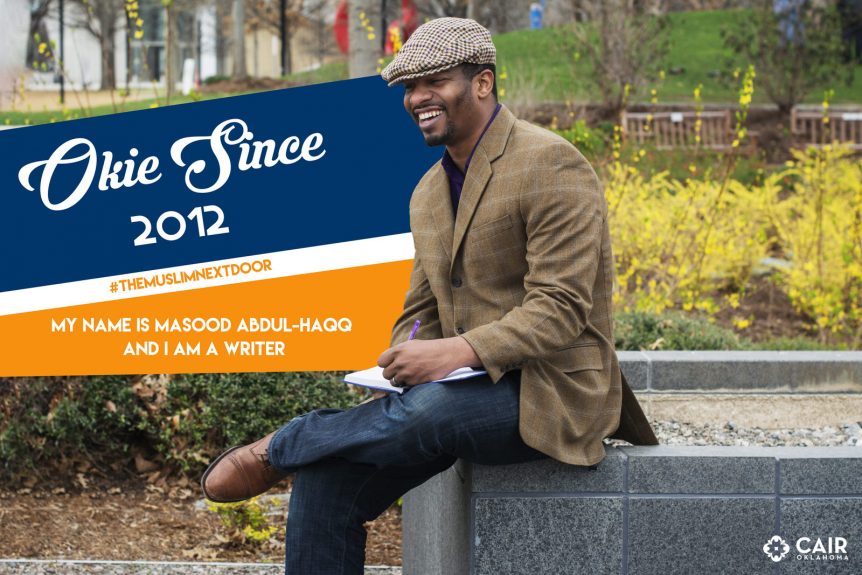 Masood opens up about his passion for his community and his vision for the future of Oklahoma City.

For the past 18 months, Masood and his wife, Dr. Noor Jihan Abdul-Haqq, have owned Peace of Mind Pediatrics, a pediatric office in Del City. “She’s the pediatrician, and I’m the business guy.” Masood explains that his faith drives him to give back and be charitable. “I’m less bottom-line driven than other people in the field… I’m more compassionate and want to help get [our patients] the care they need.”

Aligning with their desire to contribute to the community, their clinic offers services beyond pediatric care, including breastfeeding, nutrition, and zumba classes. “We get to help people on a genuine micro-level…and create a community that’s health conscience. It’s a great thing for our community and sets us apart.”

Despite the many ways they’re contributing to their community, they have still had push back due to the fact that they’re Muslim. “My wife wears a hijab, so.. Sometimes, new patients won’t come back and hint that they weren’t comfortable. There’s been no blow up situation… just some people don’t come back.”

Masood thinks some people are uncomfortable, due to the stereotype that “Muslims are angry or hateful or spiteful. I think there’s a brand of Islam that is very harsh. Most people don’t understand that they are the minority. They don’t know that Islam means peace. Those harsh doctrines are the exception to the rule. When they actually meet a Muslim and get that sense, it defies what they’ve seen on TV and opens up for dialogue.”

In addition to running a clinic, Masood and his wife have three kids: 6 year-old twins Ahmad and Ma’Iasah, and 2-year-old Susyan. The children are the main reason they live in Oklahoma.

Although he was born in Ft. Worth, Texas, Masood actually spent most of his life in Atlanta, Georgia. He even spent some time living in New Mexico. Masood has been living in Oklahoma for the past 5 years, however, as there is more family here to help out with the children than in Atlanta.

“I want to see the OKC community become known as a beacon of light.”

Although not an Oklahoma native, Masood is passionate and optimistic about Oklahoma’s future. “I want to see the OKC community become known as a beacon of light… an example of a bridge building between old, young, muslims, nonmuslims, indigenous and immigrants. I’m from Atlanta, it’s more segregated. Here, they interact more and get to know each other.”

Although he admits there is a “back drop of some hatred”, he asserts that “Oklahoma has the opportunity to be a model community in terms of how we act with each other, and I”d like to facilitate that.”

Masood’s other passion is writing. He’s been a copywriter for 11 years and has written for Sapelo Square: An Online Resource on Black Muslims in the United States.

Masood describes The Bill of Rights as “one of the most fascinating documents produced.” He is proud that the country was founded on “the idea that all men are equal… The fact that those ideas came from the 18th century. Phenomenal. The founders were forward thinking.”

Masood is also proud of the influence of Islam on the founders. “A lot of their ideas were inspired from Islam. Thomas Jefferson owned a Qu’ran… Congressman Keith Ellison was sworn in with it… There are Islamic doctrines in the Constitution.” When people suggest he doesn’t belong in the United States, he says, “It’s just funny to me… I was born and raised here; my parents and grandparents are from here. I brush it off as ignorance. I see it as an opportunity to educate somebody.”

As far as his children, Masood reveals that they haven’t had any problems with prejudice. “We’ve been fortunate.”